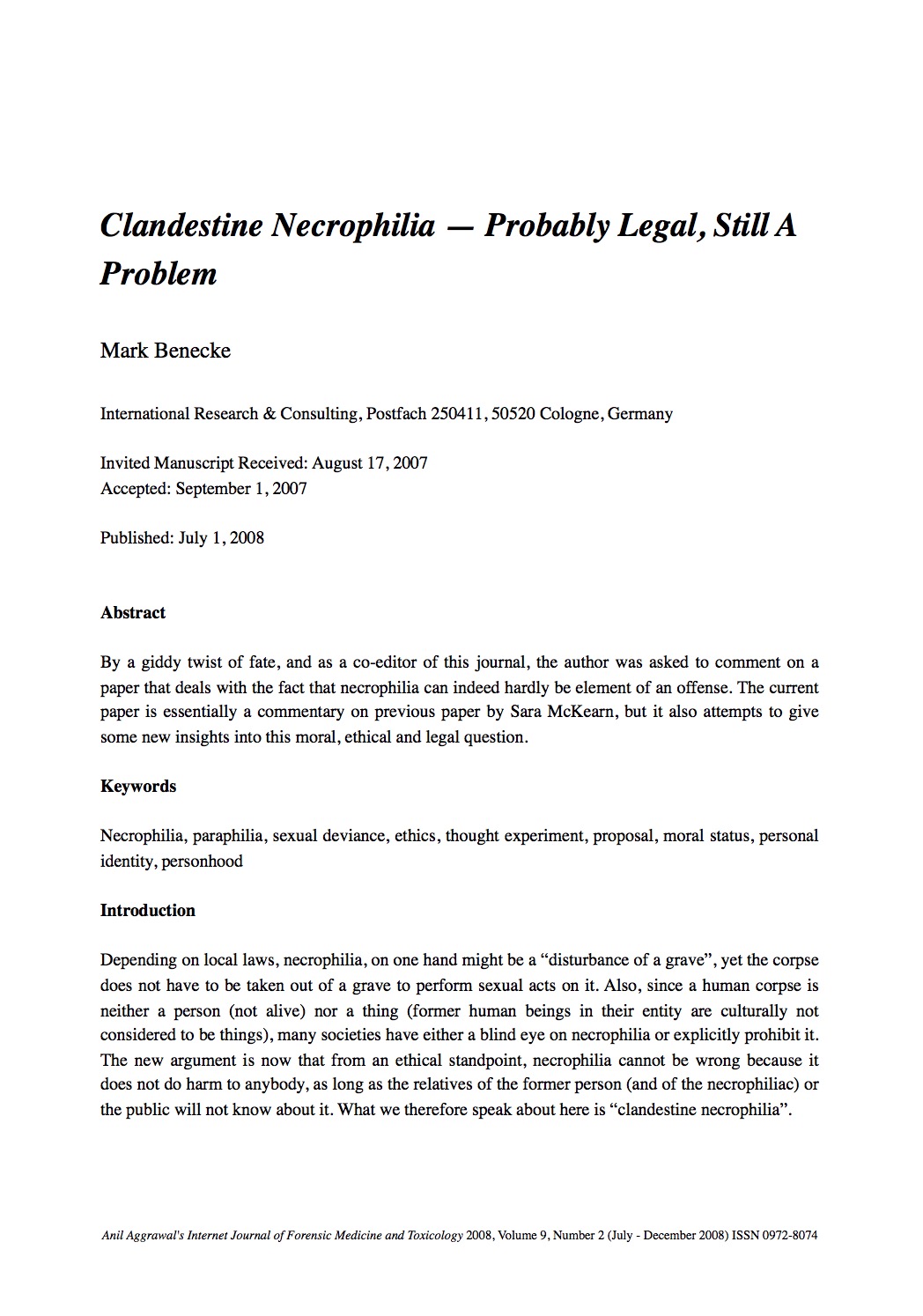 
By a giddy twist of fate, and as a co-editor of this journal, the author was asked to comment on a paper that deals with the fact that necrophilia can indeed hardly be element of an offense. The current paper is essentially a commentary on previous paper by Sara McKearn, but it also attempts to give some new insights into this moral, ethical and legal question.


Depending on local laws, necrophilia, on one hand might be a “disturbance of a grave”, yet the corpse does not have to be taken out of a grave to perform sexual acts on it. Also, since a human corpse is neither a person (not alive) nor a thing (former human beings in their entity are culturally not considered to be things), many societies have either a blind eye on necrophilia or explicitly prohibit it. The new argument is now that from an ethical standpoint, necrophilia cannot be wrong because it does not do harm to anybody, as long as the relatives of the former person (and of the necrophiliac) or the public will not know about it. What we therefore speak about here is “clandestine necrophilia”.
After talking to German philosophers, I now understand the naturalistic argument and acknowledge that that from a fresh ethical standpoint -- not from the standpoint of current moral or religious values that are merely traditional --, clandestine necrophilia might be, to put it in an as fresh term -- “okayish”.


To put it in the words of one of the philosophers, Martin Mahner:


"Most likely, we only treat human corpses so “friendly” because of their relatives. If no relatives exist, and no ante mortem wishes of the dead person are known of, then the topic of that article is a legitimate question, and I see no reason for rejecting it."


One could, however, make a point that the German philosopher Kant made concerning the treatment of animals. According to him, animals are to be treated well not because they have any interests or rights that we must respect, but to prevent humans from becoming brutalized by treating animals badly. Today, we have a different opinion on the ethical status of animals but one could extrapolate and say that those who treat a corpse badly might be at risk of treating living humans badly (for example, killing someone in order to get a corpse to fulfill their necrophilous desire). That is, however, the only argument that spontaneously comes to my mind, and one should actually reconsider old taboos once in a while." Brutalization by the way is not a purely philosophical thought but a reality. If you click on http://www.myspace.com/nicoclaux, you will meet not a necrophiliac but a corpse eater who finally did kill somebody to obtain more and better fresh flesh for consumption.


Those who know my work (and website) know that I love to count, to check, and to break taboos if necessary. So when it comes to necrophilia, I try to think of criminal cases that I actually know of, and not to simply follow the line that any moral value - at least in the court room - is made by current opinions in society, not by single necrophiliacs or taking long views. Also, I will certainly not pursue the idea that if an old-fashioned moral is the only one we have, it must be applied. That would be a boring and self-referential way to deal with the matter.


Instead, I want to ask the following:


1. If human bodies without relatives are something that can be freely acted upon, why do most societies decide to still perform rituals on those anonymous bodies (cremation, burning, burying) instead of just putting them in trash cans? The fear of “corpse poison” cannot be the reason because rats, ants, ducks, birds, crickets, pork etc. are without a doubt corpses (or parts of corpses), too, that are also deposed of in trash cans. It therefore seems that that the general idea - even in the presence of commercial thoughts (it would be much cheaper for society to put anonymous human corpses in the trash can) - is that a human corpse, unlike most animal corpses, is more than trash.


2. Medical doctors know of the massive problems arising from wills made by Jehovah’s witnesses who reject any blood that was not taken from their own, individual body. This strict, well known will is often overridden by the fickle interpretation that once a Jehovah’s witness is unconscious, his or her will might change and he or she might now agree to receive foreign blood. This is certainly not true, and common sense as well as respect for religious beliefs tells us that those medical doctors just try to find a way out of their dilemma that the Hippocratic oath forces them to save the body (not a possible soul) of a patient even if the patient does not want to be cured. If this simple matter already produces a never ending discussion, how much more discussions would start if it came to the question if a person that is now an anonymous corpse (corpse without written will / corpse without relatives) would probably have followed the line that without any will, his or her consent for sexual acts could be assumed?


I know that my pro-necrophilia counterpart in this journal will now say that one should not and cannot care for the unknown will of a probably unknown person. I do however think that some consideration for a more likely (compared to a less likely) will of a now dead person will lead to the result that many persons would disagree against the use of their bodies - in many countries, they would even reject the use of their organs to save other people’s lives - for sexual acts. In one sentence: The now dead person once did have a will. This is a big difference to a table (if one likes to have sex with tables, that is) who never had a will.
Criminalistically speaking: Do not assume - but if you have to assume, assume with reason.


A final argument of my counterpart is that some post-mortem influences (embalming, burning, putting coins inside of the mouth of the corpse) are "unpleasant invasions". In India, they put gangajal – the water from the Holy river ganges - in the mouth of a dying person, or sometimes already dead person. However, when it comes to burial rites, society defines what is "unpleasant", not the necrophiliac. If U.S. Americans for example like embalming by filling up their corpses with formalin, then there you go. I personally do think this is unnatural and unpleasant but I grew up in central Europe (Germany) where formalin burial is not only forbidden because of anti-pollution laws but also considered to be “not feeling good”.

On the other hand, most people over here in Germany eat huge amounts of pork which is considered to be most unpleasant in many Muslim cultural regions. Also, some societies or religious groups “bury” their dead in trees, mummify them, let them be eaten by vultures, throw them into the sea etc. - any of those methods can be called “unpleasant”, and many of them involve “unpleasant invasions” of cotton, needles, hooks, bird beaks, gauze, etc.

To say that unpleasant invasions are to be performed on corpses anyways, and that therefore sexual contact or sexual insertions onto or into corpses have to be legalized or at least to be cleared ethically is arbitrary and a bending of truth and reality.


This is a personal comment, and it does not follow a moral or ethical line. I accept that fresh thoughts have to be made, and I accept that it might not be necessary to have laws that explicitly prohibit necrophilia. At the same time, I do not agree that necrophilia should be explicitly permitted. It will take a lot of knowledge about the actual necrophiliac to find out if he was driven by paraphilias, love, hate, chance or simply opportunity and access. The problem is not the corpse. We should instead focus on the individual necrophilac’s character structure.


As long as this character factor is not put into the equation, I as a forensic biologist who works with stains, victims, offenders and relatives feel that necrophilia is an obscure fact of life (and interaction with the dead) that should not necessarily be forbidden but should also not be profanized to a level where it merely becomes another form of openminded sex.


Even unusual sexual acts are much more agreeable if they are not only performed in a safe and sane but also in a consensual manner. This must be true for necrophilia, too, and I am very, very concerned about the consent if not of the corpse (which is the point of the pro-necrophilia faction) but of society. Therefore, if you can, try to focus on sex with live persons. It might work as well - just use a little imagination.