The vampires next door 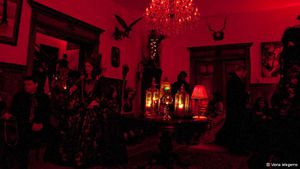 A horror movie and Halloween staple, vampires are again in vogue thanks to films like "Twilight." But these fanged folks aren't just motion picture mainstays: Vampires are also a very real subculture.


The men wore suits and black ties. The women bedecked themselves in bespoke dresses outfitted with outlandish accessories. A sumptuous buffet lay half-eaten next to a massive oaken staircase, the hors d'oeuvres and Dom Pérignon all but forgotten. The air reeked of perfume and hair product as couples swayed to-and-fro across the Persian rug-draped floor to the sounds of a light hearted Brahms symphony.


A wedding reception? No. A night at the opera? Not exactly. A country club soirée? Close, but no cigar.


It's a vampire ball.


Pop culture phenomena such as "Twilight" have fed a public fascination with the garlic-averse bloodsuckers. But some people take their affinity for the nosferatu a step further, dressing - and acting - the part.


"It is a lifestyle, for sure," Mark Benecke, author of "Vampires Among Us," told DW. "All of the people - or most of the people - involved take it very seriously. The communities are very tight-knit and stay together for years and years. The thing is, it is very hard to reach them. So what you have to do, and what happens in central Europe, is you have to gather."


Dirk Standaert and Viona ielegems, husband and wife, are two people who provide opportunities to do just that. Several times each year, the Belgian expats open up their palatial century-old estate in the dense forest just north of Magdeburg to members of the community. Their last gathering in late September was titled Danse Macabre. Dozens of vampires from across Europe - and even as far away as Mexico - attended.


"As we open doors to other worlds, we're also creating a safe haven for noble blood vampires throughout the world," Standaert said in an interview with DW. "Events like Danse Macabre are a unique occasion for kindred spirits to meet, connect and basically have a good time." 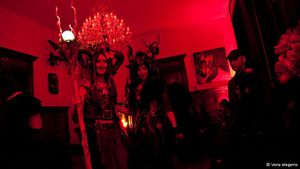 Despite their spooky appearance, many vampires love to party. Picture: Viona Ielegems


Though often pigeonholed as being similar to the Goth scene, which thrives in Germany and manifests itself in large events like the Wave Gotik Treffen in Leipzig and Amphi Festival in Cologne, experts say the vampire community isn't exactly the same. For one, it's a much smaller scene.


"Vampirism is a subtype, a very small group in Gothic culture," said Benecke. "But since it is a very small subgroup, most Gothic people would say 'I don't know anything about it.'"


According to Sebastiaan van Houten, author of several books on the vampire community, another difference is that while Goths may be preoccupied with death and morbidity, vampirism is oftentimes a celebration of life - a belief in living in the moment and enjoying unique experiences.


"Life is short," van Houten told DW. "So what we try to do is fill it with as many rewarding experiences as possible. There's already enough preoccupation with death out there."


Van Houten would know. "Father Sebastiaan," as he's known, is a professional fang maker, creating customized dental appliances for those looking to complete their vampiric transformation. A certified dental technician who's been making fangs since 1994, his clients have included "Twilight" actress Ashley Greene.


His work as a fangsmith has also led him to another vocation: host of the Endless Night Vampire Ball. The next edition of the semi-annual event - which has previously taken place in Paris, New York and New Orleans - is on November 23 in Berlin.


Such events reveal another side of vampires: Apparently, they love to party.


"We do enjoy our evenings, so to speak," said van Houten. "It's all about people being able to show up and have a good time in an uninhibited environment."


Standaert takes a similar view. "I think that we're creating our own community now," he said. "Our own family, with members all over the world, where everyone can be his or her true self, without having to worry about what others might say or think about their lifestyle." 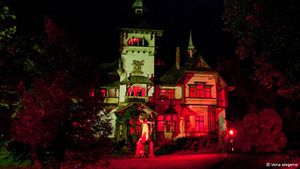 Many parties are held at Heinrichshorst, a historic hunting lodge north of Magdeburg. Picture: Viona Ielegems


While films such as "Twilight," television shows like "True Blood," and countless novels have helped transform the public's perception of vampires from the monsters they were when Bram Stoker first published Dracula in 1897, the effect on the actual vampire community has been minimal.


"'Twilight' hasn't had much of an impact," explained Benecke. "When the whole thing really started in the 1990s, that was really because of the Anne Rice books and the movie 'Interview with the Vampire.' These are the roots of the modern vampire subculture. 'Twilight' doesn't catch the motives behind vampirism because it's more of a family or love story. It has brought some different people into the community, but they don't stay because they think the whole thing is too serious."


According to Standaert, the vampire community has been around long before Stephanie Meyer introduced the world to Bella Swan and Edward Cullen. "People might be tempted to look at this new vampire wave as something temporary, but I guess that this peculiar interest in vampires has always been and will be around."


Benecke stressed that, although the vampire community may seem strange to outsiders, they're really quite harmless.


"I have never seen any type of violence inside the subculture," he said. "People always ask, 'Is a vampire going to bite me?' That's total nonsense. These people have a real life, a real body, and a real mind. So you cannot just say it's too weird."