Difference between revisions of "2004-08-AIR:The Search for Tycho Brahe's Nose"

The Search for Tycho Brahe's Nose 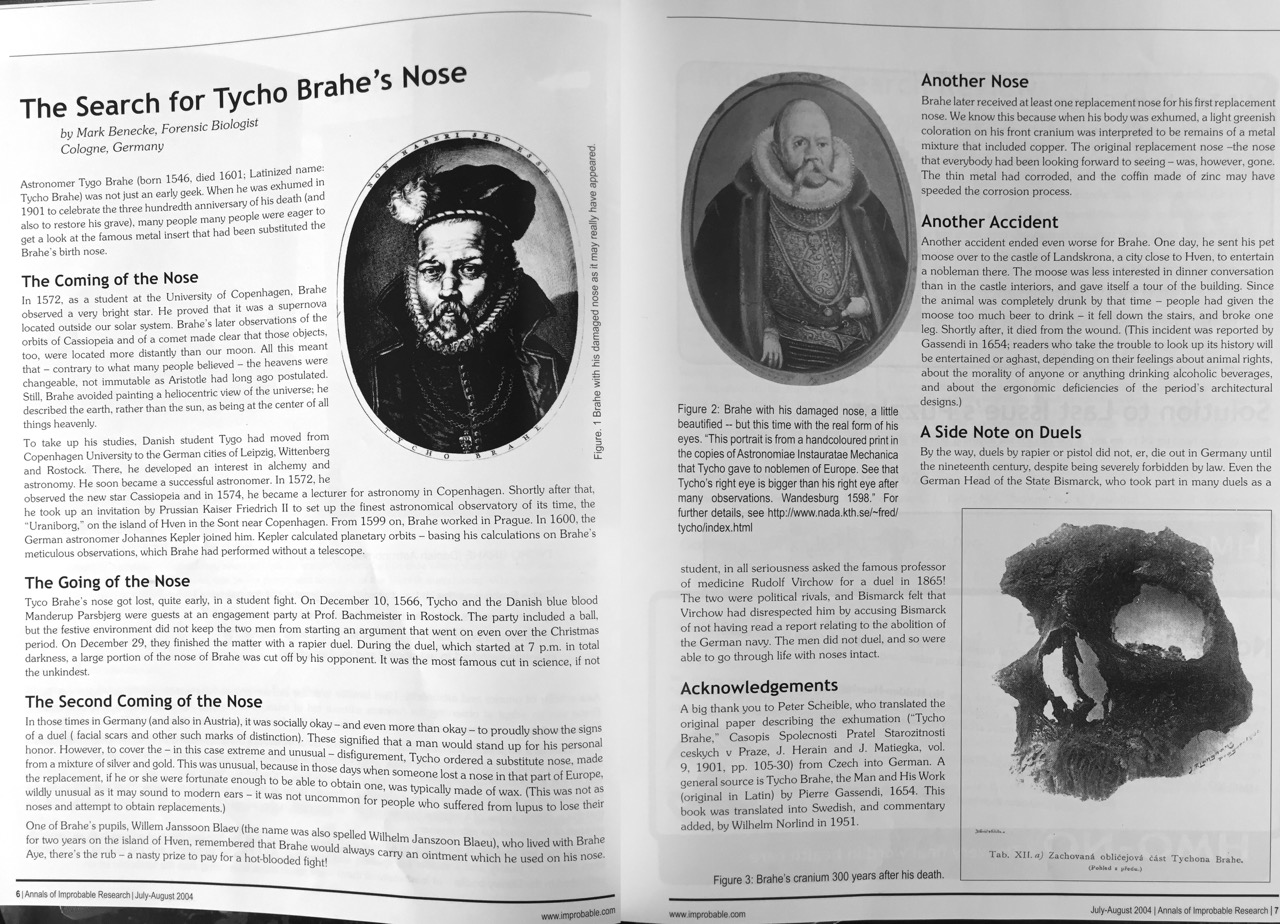 Astronomer Tygo Brahe (born 1546, died 1601; Latinized name: Tycho Brahe) was not just an early geek. When he was exhumed in 1901 to celebrate the three hundredth anniversary of his death (and also to restore his grave), many people were eager to get a look at the famous metal insert that had been substituted the Brahe's birth nose.

The Coming of the Nose

In 1572, as a Student at the University of Copenhagen, Brahe observed a very bright star. He proved that it was a Supernova located outside our solar system. Brahe's later observations of the orbits of Cassiopeia and of a comet made clear that those objects, too, were located more distantly than our moon. All this meant that - contrary to what many people believed - the heavens were changeable, not immutable Šs Aristotle had long ago postulated. Still, Brahe avoided painting a heliocentric view of the universe; he described the earth, rather than the sun, as being at the center of all things heavenly.


To take up his studies, Danish student Tygo had moved from Copenhagen University to the German cities of Leipzig, Wittenberg and Rostock. There, he developed an interest in alchemy and astronomy. He soon became a successfui astronomer. In 1572, he observed the new star Cassiopeia and in 1574, he became a lecturer for astronomy in Copenhagen. Shortly after that, he took up an invitation by Prussian Kaiser Friedrich II to set up the finest astronomical observatory of its time, the "Uraniborg," on the island of Hven in the Sont near Copenhagen. From 1599 on, Brahe worked in Prague. In 1600, the German astronomer Johannes Kepler joined him. Kepler caiculated planetary orbits - basing his caiculations on Brahe's meticulous observations, which Brahe had performed without a telescope.

The Going of the Nose

Tycho Brahe's nose got lost, quite early, in a student fight. On December 10, 1566, Tycho and the Danish blue blood Manderup Parsbjerg were guests at an engagement party at Prof. Bachmeister in Rostock. The party included a ball, but the festive environment did not keep the two men from starting an argument that went on even over the Christmas period. On December 29, they finished the matter with a rapier duel. During the duel, which started at 7 p.m. in total darkness, a large portion of the nose of Brahe was cut off by his Opponent. It was the most famous cut in science, if not the unkindest.

The Second Coming of the Nose

In those times in Germany (and also in Austria), it was socially okay - and even more than okay - to proudly show the signs of a duel ( facial scars and other such marks of distinction). These signified that a man would stand up for his personal honor. However, to cover the - in this case extreme and unusual - disfigurement, Tycho ordered a substitute nose, made from a mixture of silver and gold. This was unusual, because in those days when someone lost a nose in that part of Europe, the replacement, if he or she were fortunate enough to be able to obtain one, was typically made of wax. (This was not as wildly unusual as it may sound to modern ears - it was not uncommon for people who suffered from lupus to lose their noses and attempt to obtain replacements.)


One of Brahe's pupils, Willem Janssoon Blaev (the name was also spelled Wilhelm Janszoon Blaeu), who lived with Brahe for two years on the Island of Hven, remembered that Brahe would always carry an ointment which he used on his nose. Aye, there's the rub - a nasty prize to pay for a hot-blooded fight!

Brahe later received at least one replacement nose for his first replacement nose. We know this because when his body was exhumed, a light greenish coloration on his front cranium was interpreted to be remains of a metal mixture that included copper. The original replacement nose - the nose that everybody had been looking forward to seeing - was, however, gone. The thin metal had corroded, and the coffin made of zinc may have speeded the corrosion process.

Another accident ended even worse for Brahe. One day, he sent his pet moose over to the castle of Landskrona, a city dose to Hven, to entertain a nobleman there. The moose was less interested in dinner conversation than in the castle interiors, and gave itself a tour of the building. Since the animal was completely drunk by that time - people had given the moose too much beer to drink - it feil down the stairs, and broke one leg. Shortly after, it died from the wound. (This incident was reported by Gassendi in 1654; readers who take the trouble to look up its history will be entertained or aghast, depending on their feelings about animal rights, about the morality of anyone or anything drinking alcoholic beverages, and about the ergonomic deficiencies of the period's architectural designs.)

A Side Note on Duels

By the way, duels by rapier or pistol did not, er, die out in Germany until the nineteenth Century, despite being severely forbidden by law. Even the German Head of the State Bismarck, who took part in many duels as a Student, in all seriousness asked the famous professor of medicine Rudolf Virchow for a duel in 1865! The two were political rivals, and Bismarck feit that Virchow had disrespected him by accusing Bismarck of not having read a report relating to the abolition of the German navy. The men did not duel, and so were able to go through life with noses intact.

A big thank you to Peter Scheible, who translated the original paper describing the exhumation ("Tycho Brahe, Casopis Spolecnosti Pratel Starozitnosti ceskych v Praze", J. Herain and J. Matiegka, vol. 9, 1901, pp. 105-30) from Czech into German. A general source is Tycho Brahe, the Man and His Work (original in Latin) by Pierre Gassendi, 1654. This book was translated into Swedish, and commentary added, by Wilhelm Norlind in 1951.