Bomby: Thoughts of a Forensic Entomologist

This is a raw version of the published article. 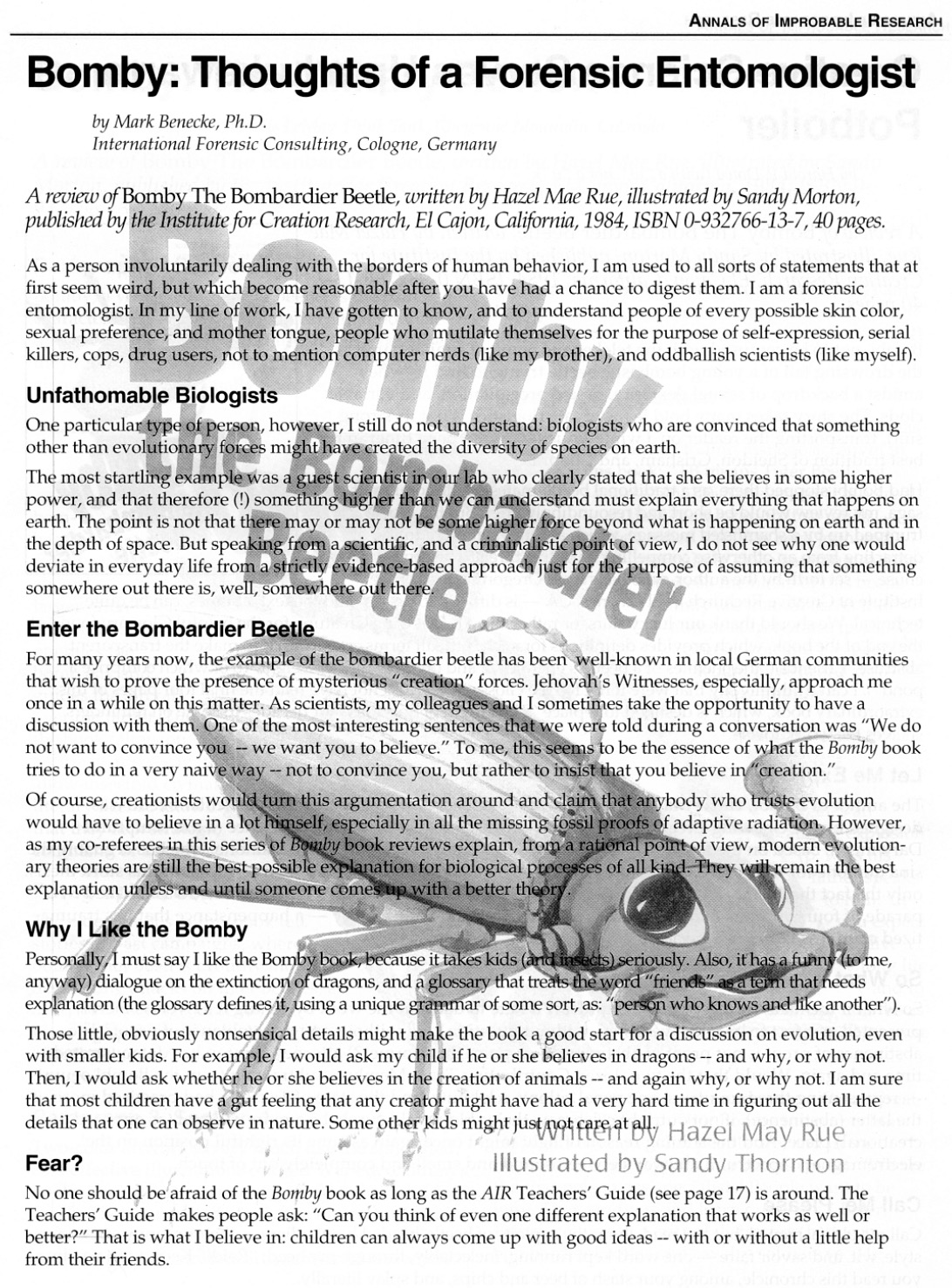 
As a person unvoluntarily dealing with the borders of human behavior, I am used to all sorts of statements that seem to be weird in the beginning only to become resonable after digesting them further. I got to know, and to understand people of every possible color of skin, sexual preference, mother tongue, people who mutilate themselves for the purpose of self-expression, serial killers, cops, drug users, not to mention computer nerds (like my brother), and oddballish scientists (like myself).

One particular type of persons, however, I still do not understand: biologists who are convinced that something other than evolutionary forces might have created the diversity of species on earth. The most startling example was a guest scientist in our lab who clearly stated that she did believe in some higher power, and that therefore (!), something higher must explain everything that happens on earth. The point is not that there may or may not be some higher force beyond what is happening on earth, and in the depth of space. But speaking from a scientific, and a criminalistic point of view, I do not see why one would deviate in everydays life from a strictly evidence-based argumentation just for the purpose of assuming that something somewhere out there is, well, somewhere out there.

For many years now, the example of the bombadier beetle is well-known in local German communities that wish to prove the presence of creational forces. Especially Jehova's Witnesses approach me once in a while in this matter. As scientists, my colleagues and I sometimes take the chance to discuss with them, and one of the most interesting sentences that we were told during a conversation was We do not want to convince you, we want you to believe. To me, this seems to be the essence of what the Bomby book tries to do in a very naive way -- not to convince but to make believe in creation. Of course, creationists would turn this argumentation around and claim that anybody who trusts evolution would have to believe in a lot himself, especially in all missing fossile proofs of adaptive radiation. However, as my co-referees explain, from a rational point of view, modern evolutionary theories are still the best possible explanation for biological processes of all kind - until a better theory might come up.

Personally, I must say I like the Bomby book, especially because it takes kids (and insects) serious. Furthermore, it has a funny dialogue on the extinction of dragons, and the glossary lists friends as a term that obviously needs explanation ("person who knows and like another"). Those little, obviously nosensish details might make the book a good start for a discussion on evolution, even with smaller kids. For example, I would ask my child if it believes in dragons -- and why, or why not. Then, I would ask it if it believed in the creation of animals -- and again why, or why not. I am sure that most children have a gut feeling that any creator might have had a very hard time in figuring out all the details that one can observe in nature. Some other kids might just not care at all.

Noone should be afraid of the Bomby book as long as the AIR Teacher's Guide is around and makes people ask: "Can you think of even one different explanation that works as well or better?" That is what I believe in: children can -- with or without a little help from their friends.