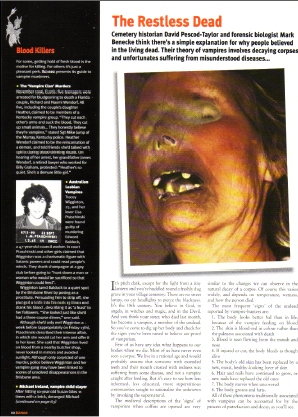 
It's pitch dark, except for the light from a tiny lantern and you're huddled round a freshly dug grave in your village cemetery. There are no street lamps, no car headlights to pierce the blackness. It's the 18th century. You believe in God, in angels, in witches and magic, and in the Devil. And you think your sister, who died last month, has become a vampire, a member of the undead. So you've come to dig up her body and check for the signs you've been raised to believe are proof of vampirism.


Few of us have any idea what happens to our bodies when we die. Most of us have never even seen a corpse. We live in a rational age and would probably assume that someone with extended teeth and their mouth crusted with redness was suffering from some disease, and not a vampire caught after feeding. But it's easy to see how less informed, less educated, more superstitious communities sought to rationalise the unknown by invoking the supernatural.


The medieval descriptions of the 'signs' of vampirism when coffins are opened are very similar to the changes we can observe m th natural decay of a corpse. Of course this varies widely, and depends on temperature, wetnes and how the person died.


The most frequent 'signs' of the undead reported by vampire-hunters are:

All of these phenomena traditionally associate with vampires can be accounted for by the process of putrefaction and decay, as you'll see.


Visit from a vampire


What happens to a corpse as it decays explains why people thought exhumed bodies were vampires. What it doesn't explain is why they reported encounters with the supernatural, often described as feeling a terrifying presence. People did (and still do) experience this - real feelings of suffocation, paralysis, breathless pressure on their chest as though somebody were lying on them. What has happened is simple: they've fallen asleep. When they do, their brains partly shut down the functions controlling voluntary movement - otherwise the body would try to move as it dreamed. Occasionally, when people wake up the body doesn't keep up with the brain. The victim is conscious but unable to move, and panic-stricken, causing choking and a sense of terror. Some people think the same phenomenon can explain the recent spate of'alien abductions.


When you die bacteria, especially the ones in your gut, start multiplying. They change the chemical structure and colour of your blood, causing the marbling effect visible above. Lots of gas ferments, which makes the body bloat and look full.


As the blood continues to break down, the reddish colour of the veins spreads to the tiny capillaries, giving the corpse a ruddy, blood-soaked appearance except where it's been under pressure. Frequently this turns to brown and finally an alarming black.


As the body decays the outer layer of skin and the lower level get separated by fluids caused by putrefaction. The top layer lifts in large blisters and large sections of it fall away, revealing reddish, healthy-looking 'new' skin beneath.


Contrary to popular belief, the hair and nails of a corpse do not grow. As the skin shrinks, its tiny erector muscles cause hairs to stand on end. Skin draws draws backe from the nails and fingers shrink, while the gums dry out and draw back from the front teeth.


Two or three weeks after death the gases produced as the body decays build up so much they start to force their way out. When expelled through the voice box they produce a groaning noise, and when they go though the arse it can sound like the corpse is farting.


Rigor mortis, which stiffens the corpse shortly after death, wears off after a few days and the body will make small movements as its limbs grow soft again. Eyes and tongue bulge because of gas build-up, and the loose outer skin of the face can slip, as if moving.


No, hypohidrotic ectodermal dysplasia, a rare genetic disease which makes most of your teeth grow short. The canines - a vampire's traditional 'fangs' - look particularly long by comparison.


Yes. Many conditions such as polymorphic light eruption (above), porphyria and Sezary's syndrome force sufferers to hide from sunlight. Their pale skin becomes red and swollen when exposed to daylight.