Founder of the Transylvanian Society of Dracula 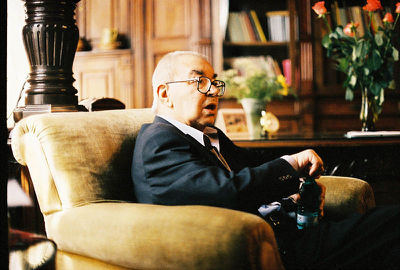 
Daniela: Nicolae was born in 1937, on December 6, in North-East of Romania, now part of the Republic of Moldova, close to Cernauti. If it is about me - I was born in Bucuresti, on July 19, 1955. I graduated a college in Bucuresti and I had three jobs - initially, at a school, then at the Ministry of Tourism and finally, since 1993, at the TSD and CMJ (Company of Mysterious Journeys, a subsidiary of TSD; since 1997).


When did you meet Nicolae first, and how long did you work together, and in which positions?


I met Paduraru in 1978, when I started work at the Ministry of Tourism. I was fascinated by him in two ways firstly as a person (I didn't even know his name) and secondly as a personality. He was escorting the Romanian tour of a well-known actor, who at the time was playing the leading role in a television series called The Onedin Line. However, I was mostly fascinated by him as a man. We were work colleagues. The fascination was mutual, so we stayed together and worked together since 1978.


How did the idea of the TSD come up out of your perspective?


Nicolae used to work at the English desk of the International Relations Directorate. He was appointed in-charge-of tourists and journalists coming to Romania to follow in the footsteps of Bram Stoker's novel. Contact with so many foreigners visiting Romania to follow the story of a novel, which was totally unknown to us at the time, made him wish to materialize all this into a non-profit, cultural and historical society aiming, among others, at shedding light on the unfortunate confusion between the historical and fictional Dracula. This confusion arose with the publication of the paper In Search of Dracula. In 1990, when things could be told and done differently, Paduraru's wish came true. It was realized in the Transylvania Society of Dracula, which was founded in September 1991 by writers, folklorists, historians, ezoterists, romantics and Dracula fan from Romania and abroad and Romanian and foreign cultural figures, who shared the same feelings.


Who (and when) were the first tourists who followed your invitation, and how did they behave out of your view?


It's hard to say when the first tourists arrived. If we start counting from 1991, then the first tourists arrived on Halloween, in 1991. In fact, Paduraru used to escort American and British groups arriving to spend Halloween in Romania even before 1990. Since the groups were under surveillance, the purpose of their arrival on October 31 was kept very quiet. Our first tourists were thus part of a continuum, of an existing tradition of people coming to Romania for Halloween. The difference was that this time they were openly invited and escorted by the Transylvania Society of Dracula. Their attitude toward our history was always casual, respectful, sometimes even uninterested. Their purpose was to walk in the footsteps of Dracula, as imagined by Bram Stoker. This pretext to show them Romania, otherwise pretty much ignored by the world at large, was a great advantage for us.


Please describe one or two moments (precisely) that you remember with Nicolae and the TSD that you find especially special.


I feel that the first significant moment worthy of mention is organizing the first World Dracula Congress in 1995. This was the time when two people, Paduraru and I, succeeded in bringing together more than 300 people to one common point, generically called Dracula, and in arousing the interest (incidentally, for the first and last time) of the main tourist authority: the Ministry of Tourism and the Tourism Minister himself. This was the work of two people, and it was met with a resounding response from the major news agencies and worldwide. The second noteworthy event was our trip to the United States, at Los Angeles in 1997. We were able to come to the US with our group of eminent scholars to participate, on behalf of TSD, in the Dracula-Bram Stoker Centennial organized by our chapters in Canada and the US, namely by Ms. Elizabeth Miller and Dr. J. Gordon Melton.


What is your opinion about working on a topic (vampires) that no romanian person believes in?


Working within a paradox is an extraordinary thing. It is true that we don't believe in vampires. However, we can understand, or rather, we have done our best to understand in a true light, the beliefs of the Western World in these creatures. They are creatures of the imagination, from the realm of folklore, and they represent types and archetypes that we have probably preserved in a still-unexplored memory. We must use a sensitive approach, so as not to offend anyone neither believers nor non-believers in vampires and respect their collective and personal traditions.


Our only cooperation with the government was in 1995, when the Ministry of Tourism contributed funds to organize the first Dracula Congress. Other than this, we have had no cooperation of any kind whatsoever with the government. We are an independent, non-governmental, apolitical, non-profit and cultural and historical organization. We have supported ourselves, and we are trying to support ourselves by what we are doing, with our own money.


What were the most important thing from you that you learned from Nicolae?


What were the most important thing for you that you learned from working with the tourists?


The most important thing is to respect each tourist individually, as my best friend.


As a kid, did you believe in strigoi, yelle(le) and such things?


No, I was raised in the urban culture of Bucharest, where these types of beliefs did not survive, and the fears that are, or were, noticeable in country people had already been lost.


What do you think now about strigoi, yelle(le) and supernatural powers?


I still don't believe in ghosts or apparitions, but I do believe in supernatural powers that exceed our immediate power of understanding.


Which impact do you think did the congresses and tours have on the foreigners over such a long time?


One of the strongest and most desirable impacts is definitely the separation of the two entities-personalities-subjects that have cast a shadow on Romanian history for such a long time, namely causing the foreigners, whether tourists, journalists or Dracula aficionados, to perceive the difference between the historical Dracula (Vlad Tepes) and the fictional Dracula (Bram Stoker's Count Dracula).