Flies and ants: A forensic entomological neglect case of an elderly man in Calabria, Southern Italy 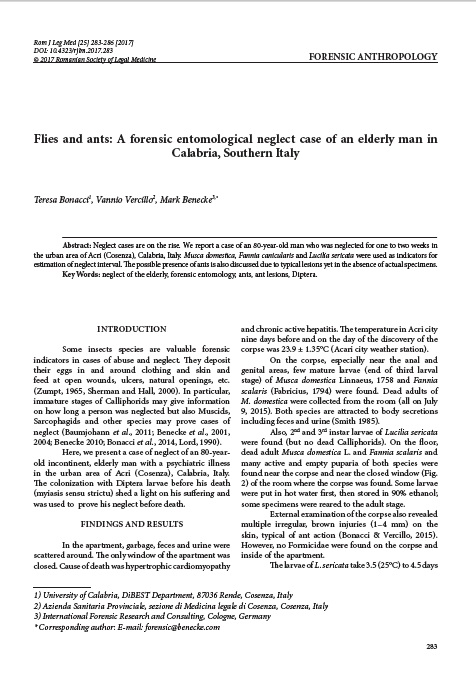 Abstract: Neglect cases are on the rise. We report a case of an 80-year-old man who was neglected for one to two weeks in the urban area of Acri (Cosenza), Calabria, Italy. Musca domestica, Fannia canicularis and Lucilia sericata were used as indicators for estimation of neglect interval. The possible presence of ants is also discussed due to typical lesions yet in the absence of actual specimens.

In memory of Dan Dermengiu (MB)


Some insects species are valuable forensic indicators in cases of abuse and neglect. They deposit their eggs in and around clothing and skin and feed at open wounds, ulcers, natural openings, etc. (Zumpt, 1965, Sherman and Hall, 2000). In particular, immature stages of Calliphorids may give information on how long a person was neglected but also Muscids, Sarcophagids and other species may prove cases of neglect (Baumjohann et al., 2011; Benecke et al., 2001, 2004; Benecke 2010; Bonacci et al., 2014, Lord, 1990).


Here, we present a case of neglect of an 80-yearold incontinent, elderly man with a psychiatric illness in the urban area of Acri (Cosenza), Calabria, Italy.


The colonization with Diptera larvae before his death (myiasis sensu strictu) shed a light on his suffering and was used to prove his neglect before death. 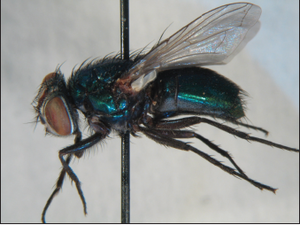 In the apartment, garbage, feces and urine were scattered around. The only window of the apartment was closed. Cause of death was hypertrophic cardiomyopathyand chronic active hepatitis. The temperature in Acri city nine days before and on the day of the discovery of the corpse was 23.9 ± 1.35°C (Acari city weather station).


Also, 2nd and 3rd instar larvae of Lucilia sericata were found (but no dead Calliphorids). On the floor, dead adult Musca domestica L. and Fannia scalaris and many active and empty puparia of both species were found near the corpse and near the closed window (Fig. 2) of the room where the corpse was found. Some larvae were put in hot water first, then stored in 90% ethanol; some specimens were reared to the adult stage.


External examination of the corpse also revealed multiple irregular, brown injuries (1–4 mm) on the skin, typical of ant action (Bonacci & Vercillo, 2015). However, no Formicidae were found on the corpse and inside of the apartment.


At 25°C, the duration (in days) of post-feeding larvae of M. domestica is 3.33± 0.33. The duration of pupae age is 6.33 ± 0.33 (El-Kady et al., 1999). Total duration of development from eggs to pupae is 13.30 ± 0.66 days. Musca domestica is known to be a common synantropic species. Since the larvae were found on the corpse, and since Fannia canicularis was also present, this was considered to be a strong indicator for the presence of feces and urine due to neglect, as has been reported from other cases of neglect (Benecke, 2010). Fannia in particular has a strong preference for urine and is therefore commonly found in toilets, privies, stables and pigsties (Smith 1986).


Insect colonization of the neglected man took place for around approximately week. His fam-ily had not taken care of him, as was concluded from the hygienic conditions including the insect evidence inside of the house.


Cases of neglect towards elderly people or children seem to be rising (Doward 2012, dpa 2003, Sheridan 2017) due to changes in age structure but recently also largely due to substance abuse. Neglect is not always easy to prove since social workers and rescue personnel may not check for stains. For neighbours and relatives, some cases of neglect are also shocking and difficult to comprehend which may lead to wrong statements.


Here (and probably often), Musca domestica which is attracted to decaying organic matter with a preference for human feces at neglected and dead persons, along with Fannia canicularis which is attracted to urine and feces, allowed estimation of the antemortem neglect period. In neglect cases, forensic entomology is suitable to better understand the circumstances of death, and to prepare objective reports to the court and to the police. Especially the discovery of F. canicularis larvae on a body indicates that infestation occurred prior to death (Benecke and Lessig, 2001).


Some - especially Calliphorid - fly species are known to be associated also with wounds on living bodies and can therefore be use for maggot therapy (Fleischmann et al., 2003; Sherman & Hall, 2000). If a person is not properly cared for and cleaned, blow flies are attracted to their bodily wastes, depositing their eggs with a preference for open wounds. In Calabria, L. sericata is a synanthropic species strongly related to the urban area and to the warmer months (Greco et al., 2014). It is therefore also an interesting marker for neglect (Benecke & Lessig 2001).


In contrast to diptera on corpses, the behaviour of ants in forensic cases is less in focus but may be soon due to climate change (Benecke et al. 1999; Benecke 2008; Bermúdez 2010; Campobasso et al., 2009; Ramón et al., 2015; Salona-Bordas et al., 2014; Ventura et al., 2010). In the context of neglect, a major concern relating to ants are postmortem skin lesions that may be confused with antemortem injuries by unexperienced personell. Pheidole and Camponotus ants were observed to produce damage to the nose and ears of pig carcasses (Barros et al., 2008). In Brazil, ants caused small injuries at every decompositional stage and at different parts of rat corpses (Moura et al., 1997).


In the case of the globally expanding and invasive fire ants (Solenopsis spp.), one must also take care to distinguish between cause of death due to allergies or actual poisoning and their possibly unrelated presence. Until now, ants were used to determine postmortem interval, mostly by use of colony buildup (Goff & Win, 1997), or to determine if a perpetrator had been at a scene of crime (Benecke & Seifert, 1999; for determination of ants, it is necessary to contact a specialist since their determination needs experience). Generally, we highly recommend to document photographically, and to collect arthropods early at the scene of neglect to avoid wrong accusations as well as failing to notice objective proof of neglect.


11. Campobasso C, Marchetti D, Introna F, Colonna M. Postmortem artifacts made by ants and the effect of ant activity on decompositional rates. The American Journal of Forensic Medicine and Pathology, 2009;30: 84–87.


28. Zumpt F. Myiasis in Man and Animals in the Old World: A Textbook for Physicians, Veterinarians and Zoologists. Butterworth, London, England, 1965.