on a Human Corpse in Southern Italy: First Report* 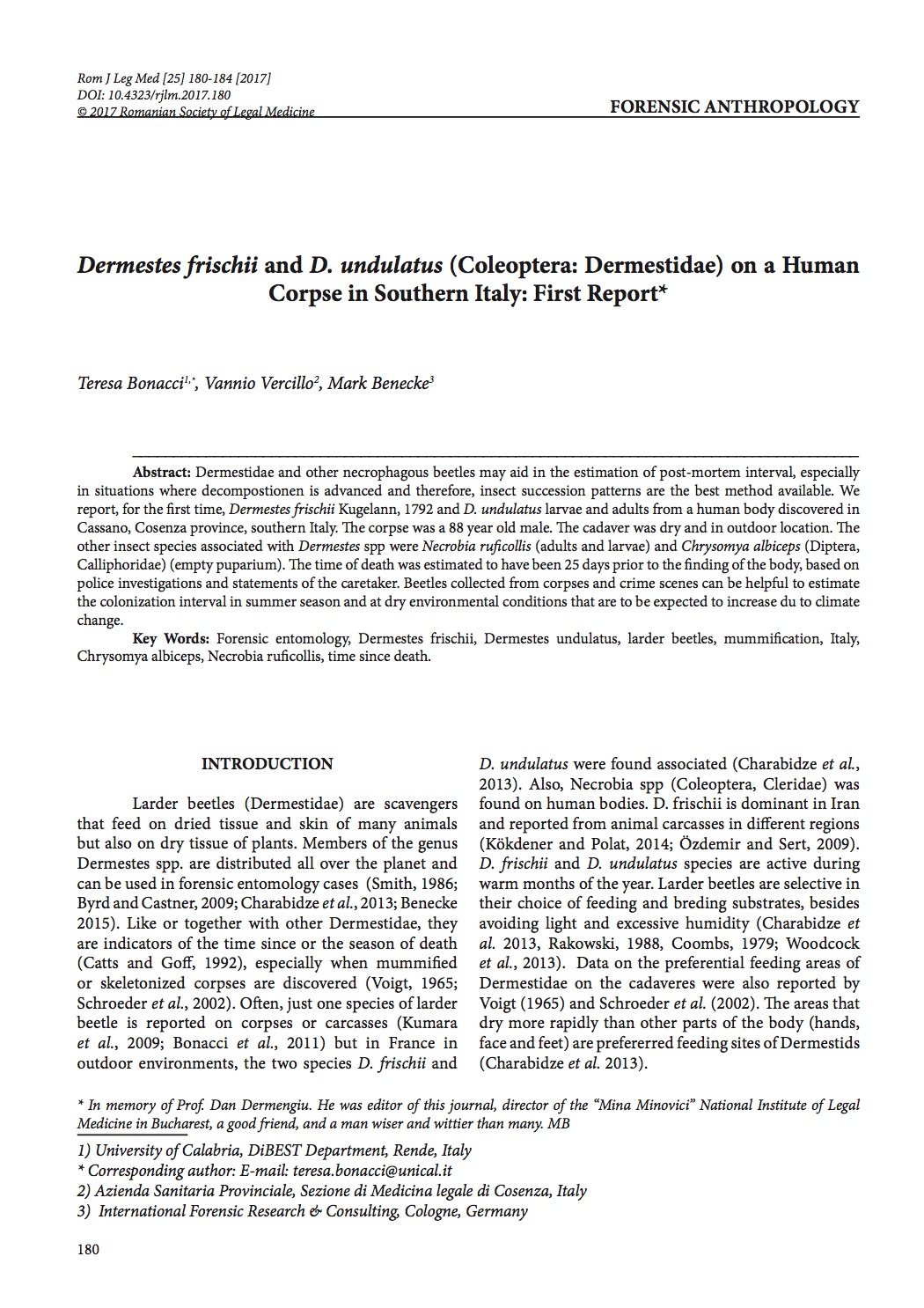 Abstract:
Dermestidae and other necrophagous beetles may aid in the estimation of post-mortem interval, especially in situations where decompostionen is advanced and therefore, insect succession patterns are the best method available. We report, for the first time, Dermestes frischii Kugelann, 1792 and D. undulatus larvae and adults from a human body discovered in Cassano, Cosenza province, southern Italy. The corpse was a 88 year old male. The cadaver was dry and in outdoor location. The other insect species associated with Dermestes spp were Necrobia ruficollis (adults and larvae) and Chrysomya albiceps (Diptera, Calliphoridae) (empty puparium). The time of death was estimated to have been 25 days prior to the finding of the body, based on police investigations and statements of the caretaker. Beetles collected from corpses and crime scenes can be helpful to estimate the colonization interval in summer season and at dry environmental conditions that are to be expected to increase due to climate change.

Larder beetles (Dermestidae) are scavengers that feed on dried tissue and skin of many animals but also on dry tissue of plants. Members of the genus Dermestes spp. are distributed all over the planet and can be used in forensic entomology cases (Smith, 1986; Byrd and Castner, 2009; Charabidze et al., 2013; Benecke 2015). Like or together with other Dermestidae, they are indicators of the time since or the season of death (Catts and Go , 1992), especially when mummified or skeletonized corpses are discovered (Voigt, 1965; Schroeder et al., 2002). Often, just one species of larder beetle is reported on corpses or carcasses (Kumara et al., 2009; Bonacci et al., 2011) but in France in outdoor environments, the two species D. frischii and D. undulatus were found associated (Charabidze et al., 2013). Also, Necrobia spp (Coleoptera, Cleridae) was found on human bodies.


D. frischii is dominant in Iran and reported from animal carcasses in different regions (Kökdener and Polat, 2014; Özdemir and Sert, 2009). D. frischii and D. undulatus species are active during warm months of the year. Larder beetles are selective in their choice of feeding and breding substrates, besides avoiding light and excessive humidity (Charabidze et al. 2013, Rakowski, 1988, Coombs, 1979; Woodcock et al., 2013). Data on the preferential feeding areas of Dermestidae on the cadaveres were also reported by Voigt (1965) and Schroeder et al. (2002). The areas that dry more rapidly than other parts of the body (hands, face and feet) are prefererred feeding sites of Dermestids (Charabidze et al. 2013).

Figure 1. The cadaver was found in the morning of July, 31 2016, under a Pistacia lentiscus bush (A), at 800 meter to the nursing home where the elderly man was hosted (B).

A 88 years old man was found dead in Cassano allo Jonio, Cosenza province in southern Italy on July, 31 2016. The cause of death was hypertensive myocarditis. The time of death was estimated to have been 22-25 days before the discovery of the body, based on police investigations and testimonies. The man was last seen alive in July, 6 2016. The corpse was found near, 800 meter away from the nursing home where the elderly had been living. The body was found in a supine position dressed in a shirt, pants and socks (Fig. 1) under a Pistacia lentiscus bush. The shoes were found close to the body. Autopsy was carried out on August 1, 2016 in Cassano Jonio (CS).


At medico-legal examination, the corpse was found to be in advanced state of decay (mummified stage). The skin was fully dried and of dark-brown color (Fig. 2). 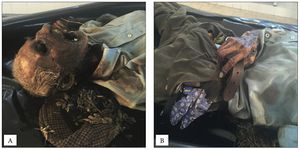 Figure 2. Skin lesions caused by blowfly larvae and Dermestid and Clerid beetles on (A) mummified head (note that the hair is still present) and (B) dried out hands.

Entomological evidence was collected from and around the body, and from the inside of the bag used to transport the corpse to the autopsy room (Haskell and Catts, 1990; Byrd and Castner, 2009). Live insects (adults and larvae, empty puparia of Ch. albiceps and larval exuviae of Dermestes spp.) were collected from the corpse during autopsy. Macroscopic medical investigations showed superficial skin lesions on various parts of the body caused by Calliphorid (blowfly) larvae as well as Dermestid and Clerid beetles. The skull was undamaged (Fig 2). No signs of trauma against the osseous structure were observed. The skin and the osseous structure of the thorax was undamaged, and no feeding activity of Calliphorid larvae and Dermestids was observed in these regions.


Numerous larder and Clerid beetles (larvae and adults) were found on the corpse and transferred to the laboratory of Entomology of the DiBEST Department, University of Calabria. Particularly, from the pelvis and the legs, many empty larval skins as well as live adults and larvae were found. Empty blowfly puparia (Calliphoridae) were found and collected, mostly from the head and the neck area (Fig. 3), and from the pelvis.

Figure 3. Head and neck area (A) where several empty puparium of Ch. albiceps were found. Many empty larval skins, and numerous life adults and larvae of dermestid beetles were observed at the pelvis (B).

Live Dermestid larvae were reared in laboratory in a plastic container in a climate chamber at 25 ± 0,5° C. The emerging beetles were identifed and double-checked by taxonomic keys (Hava and Kadej, 2006; Marcin Kadej, personal information). Dried frass (perithrophic membranes) was found on the corpse, mostly near the genital and pelvic areas (Figs 3 and 4) and on the legs (Fig. 5) where skid lesions had been caused by Dermestid beetles and Calliphorid maggots (Fig. 4). 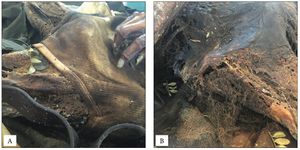 Figure 4. Peritrophic membranes of Dermestes spp., at genital and pelvic areas (A). The dried frass it is frequently found when dermestid beetles have fed on human corpse (B) (Byrd and Castner, 2009; Benecke, 2015). 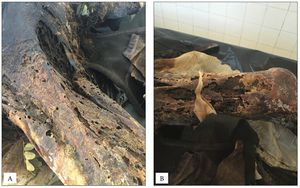 Figure 5. The dried frass (A) and feeding damage (maybe the result of a mixed activity) by dermestid beetles and maggots (A and B).

Dermestida are distributed worldwide; they feed on various types of dried animal tissue. The genus Dermestes is of forensic importance because it is attracted to human corpses during dry and skeletal stages of decomposition (Pettigrew 1834; Smith 1986; Benecke, 2008; Byrd and Castner, 2009). These beetles are part of the sarcosaprophagous insect succession of the human corpse and animal carcasses (Schroeder et al., 2002; Bonacci et al., 2011; Charabidzeet al., 2013; Keshavarzi et al., 2015) in many geografical areas. Usually, the presence of dermestid beetles and their peritrophic membranes on a corpse proves that considerable time has elapsed since the death of the subject (Byrd and Castner, 2009; Benecke, 2015).


Dermestes frischii it is a abundant species found outdoors (Charabidze et al., 2013) and collected in the warm months from human corpses (Kökdener and Polat, 2014) and on animal carcasses (Bana et al., 2012). D. undulatus it is very common outside but was never observed in indoor environments. Our findings concerning dermestid beetles are in agreement with previously reported data (Charabidze et al., 2013). In fact, both species (D. frischii and D. undulatus) were found associated in a dry and hot outdoor environment of southern Italy but, instead, in our reported case, the preferred feeding areas were legs and pelvis. These differences could be explained by different rates of mummification, and by different so tissue thickness.


Empty puparial shells of Chrysomya albiceps suggest that maggots feed rapidly on so tissue of the head, neck and genital area. It is known that fly larvae need humidity for their development and, a mummified body in a dry and warm habitat it is not a suitable substrate for a long maggots feeding activity. In conclusion, hot and dry environment contributes to rapid mummification which is a favourable condition for larder bettle activity (feeding and breeding) on the corpse.


Lower as well as very high temperatures and an arid environment disallow the development of Diptera larvae. In such cases, the decay of corpses and carcasses is caused by the activity of other insects like Silphid beetles (Bonacci et al., 2011b). The findings reported here show that D. frischii and D. undulatus are active during warm months in Calabria and by studying their rates of development in lab conditions and at different experimental temperatures, both species could be used for estimation of post-mortem interval. Dermestes species may be found more frequently since due to climate change, warmer and more arid environmental conditions might spread (Lu 2007).


Acknowledgement.
We would like to thank Marcin Kadej for his time and help for the confirmation in the species identification.