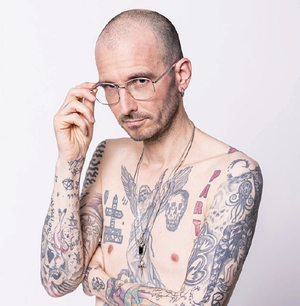 Dr Mark Benecke is a German forensic biologist. He works internationally on forensic cases as a freelance expert witness. He also teaches at various police academies and acts as a visiting professor to universities in Germany, England, Vietnam, Colombia, and the Philippines. But he is not only famous for his forensic expertise and books, he is also well-known in the Gothic scene for his lectures, for his music and also for his tattoos. How many tattoos Mark has already immortalized on his body, he knows no Ionger exactly - his passion for this art form cannot be overlooked. He is also Chairman of the Pro Tattoo Association. The association was founded in 2011 and serves "information, training and public relations for and by members of the tattoo industry". No wonder he is the perfect candidate for our interview se ries about tattoos. Curious? Let's go!


Reflections of Darkness: When did you get your first tattoo and what was it? Did it take much time until you decided to get it done?


Mark: It is a lizard from a determination book for Mediterranean lizards on my shoulder. The studio was there all my youth, so I did it pretty "naturally". The tattoo artist was old-fashioned, I looked pretty nerdy land that was not cool then), and he did not like flowers and lizards too much but his wife did the tattoo beautifully. Of course, he sent me away first and took a deposit and the usual stuff ;) We are friends until today.


How many tattoos do you have? Could you please tell us their story?


Maybe one hundred. It's too much to tell all the stories, but they come from all over the world, i.e. Medellin, Manhattan, New Orleans, Gießen, Erfurt, Berlin, Amsterdam, you name it. There will be an app (yes!) out soon where you can dick on some of my tattoos and then a story appears. Reason is that I collected tattoo stories over a long time for the German "Tätowiermagazin" (trans. Tattoo Magazine) and now for the Grassi Ethnographie Museum in Leipzig. To celebrate this, we will do some crazy shit like the app and a nice poster.


Have you already got all the tattoos that you wanted or will you get some new ones in the future?


Sure, wherever something comes up. For the elections, I did a video for a campaign that tries to make more people vote and got an "election cross" tattooed. I also have lotsa tattoos of musicians I come across but since that's not predictable, only time will tell. If possible, I also get souvenir tattoos from eighties, e.g., a peanut from Nola. That only worked coz the shop was open very, very late ;) -- during daytime and in the evenings, I was at a forensic congress.


Have all your tattoos been done by one tattoo artist or by different ones? How do you choose the tattoo artist? In addition, who draws your sketches?


Whatever fits. In Cologne, there was just one tattoo studio when I was younger, so there was no choice (Dieter and his wife Anke are the coolest, though, so all perfect). Also, at the shops of Tattoo Peter and formerly Hanky Panky in the Amsterdam red light district, they just tell you who will do the tattoo, no discussions (they do excellent tattoos, so again, all good). Some tattoo artists are friends, and my wife does tattoos, too, so of course, I tend to have more tattoos of friends and family because my schedule is hellish and we gotta fit it in.


Getting tattooed hurts, how do you cope with the pain during the sessions?


Never thought about it. /t's just a fact. On my neck, I used lidocaine but all else just hurt, except, for unknown reasons, under my armpit which strangely did not hurt too much. Wtf?


Do you regret getting tattooed sometimes?


If I regret it, then I change it. That happened only once because the tattoo artist was a right-wing asshole, so I went to a friend who is very insane, tolerant and cool and let him cover it any style he wanted (it became a snaketopuss something monster). Apart from that, my tattoos are tattoos, i.e. theyare made to last.


What is your taboo in terms of tattoos? What kind of tattoo would you never get done and don't like to see on other people?


I have no idea. I depends on the eircumstances, time, mood ... the course of the world turning and spinning ...


Some people say that the drive to acquire body art is addictive while others say it fails to meet the true definition of an addiction, simply calling it a passion. Is it really impossible to stop?


Many people stop, so that experiment is done ;) Maybe the misconception comes from the fact that many people do not believe that their body is their body and that they can -- sometimes easily -- change it. Since tattoos are a simple way to discover that, tattoos may seem "addictive" whilst they are just a road towards a body image that the person prefers.


Currently, tattoos are a new trend; many people do not care about the meaning, they just want to have something coloured on the skin, to be in trend. Those people often just go into a tattoo salon and ask which drafts they have. Tattoo artists are not artists any more, they produce consumer goods. Not all of them, of course. How do you feel about this situation?


All tattoo artists that I met when I was younger did exclusively consumer goods. In Hamburg at Reeperbahn (red light), in Cologne's "Elektrische Tätowierungen" and everywhere else, you would have a list and that was it. So just getting something out of a "menu" is very old-fashioned. I do not have any problem with that. If you prefer art, ask the many artist who are also available and do tattoos. But there is no need to look down to the good old people who just offer you something. Not everything has to be art. Many of my artist friends did fantastic "free pieces" (they could do whatever they wanted on the particular piece of skin of mine) but many traditional flash pieces like my "Jail Bait" lady from Amsterdam are also fine, or some names I just wanted to have on my skin, or the beginning of a letter in Sindarin language. Skills are needed for letters (badly needed) but art is not a necessity. So everybody should do what he, she or it likes, prefers, and wants.


I would like to talk about the social aspect of tattoos, too. Previously, many people believed that if you have a tattoo, you will be never be successful and will not find a "good" job. Have this state of mind and people's perceptions changed or are these prejudices still alive?


I do not know enough conservative persons, so I am not sure. My wife is more the "social discusser" - I just will not take bullshit, so in most cases, I do not listen to views not based on objective research. In a very conservative region in Germany, we once had a nonsense problem at a police school where a teacher bullshitted the police kids about tattoos. That was the only time I really wrote an article that showed that all prejudice against tattoos was scientifically disproved one hundred years ago.


Also, we did a study recently to check which type of person prefers tattoos on themselves. It is known since a hundred years that tattoos do not relate to any relevant character traits, and that is also what we found in our study. Not even extraversion scored high.


Which advice would you give to people who are going to get their first tattoo? How to choose a tattoo artist? Colour or black and white? Any practical advice?


If you feel comfortable with your choice and the tattoo artist, go ahead.