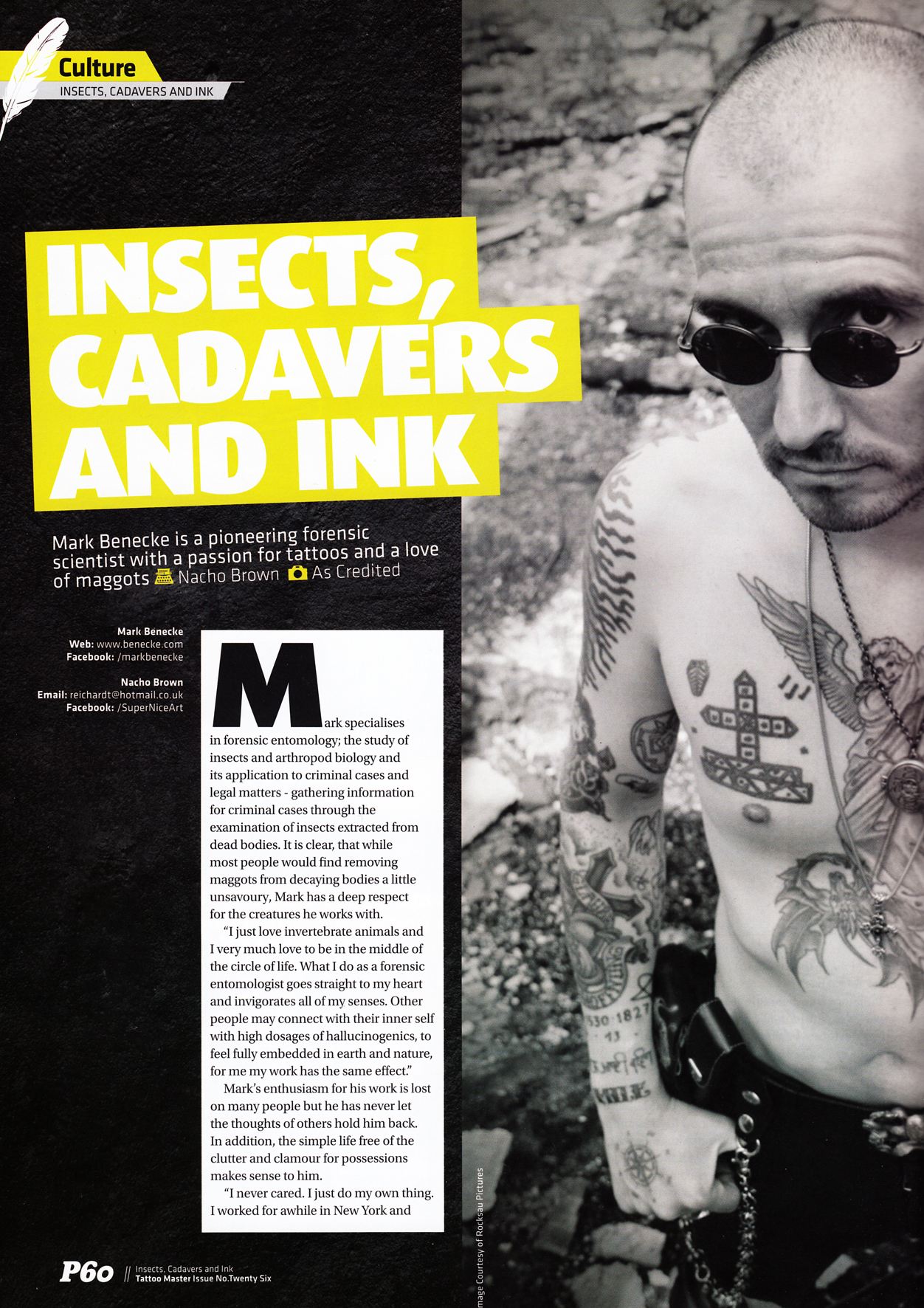 Mark specialises in forensic entomology; the study of insects and arthropod biology and its application to criminal cases and legal matters - gathering information far criminal cases through the examination of insects extracted from dead bodies. It is dear, that while most people would find removing maggots from decaying bodies a little unsavoury, Mark has a deep respect far the creatures he works with.


"I just love invertebrate animals and I very much love to be in the middle of the circle of life. What I do as a forensic entomologist go es straight to my heart and invigorates aII of my senses. Other people may connect with their inner self with high dosages of hallucinogenics, to feel fully embedded in earth and nature, for me my work has the same effect“.


Mark's enthusiasm for his work is lost on many people but he has never let the thoughts of others hold him back. In addition, the simple life free of the clutter and clamour for possessions makes sense to him.


"I never cared. I just do my own thing. I worked for awhile in New York and while there I sometimes lived on food that was left outside hotel rooms for the room service to pick up. Still today my friends make fun of me because I never throw away food and even eat food that other people leave. In Manhattan I worked at the Chief Medical Examiner's office as a forensic biologist and I lived in a basement, the cellar of an apartment.


I really did not need much. I do not own a car, or a flat, or anything except my computers, very old books, dissection microscopes and the like. I get along easily and keep everything low maintenance. I find that this has two good side effects: no one can threaten me by taking things away from me and nobody thinks I want his or her job, or power, or money, or what not. So those who want my work, ask for it. Those who do not need it, do not ask. It was like that from the first day onwards. In most countries I have good and stable working relationships in universities, with the police and so on. It's not a struggle, the fact that I live in my lab.“


In recent years forensics and tattooing have begun to cross over with specialists looking at the state of decay of a tattoo to help determine the time of death and using tattoos to help identify bodies. But Mark still feels there is so much more headway to be made.


"More research needs to be carried out in this area. To get an identification process going, sometimes the police enhance tattoos from bodies of the recently deceased, or from the body parts of on es that are decomposed. And sometimes I also I ask around if anybody knows a particular style or motif so we may find out in which region of the world, or in which tattoo parlour, it may have been done.“


Mark's own body is extensively tattooed with a mixture of styles and techniques from rough and ready home done pieces to detailed neo-classical designs. Mark was twenty years old when he got into tattooing and it all started in the city of Cologne, in Germany.


"This is where the cologne perfume comes from and why cologne perfume is called 'cologne’. No kidding! Anyway, back in the eighties, we had one of the first legal German tattoo studios. The window of the shop, the whole area, was rough and basic. You know, just a few pictures of Japanese tattoos etc.


I went in with all the respect a person can have and asked if they could do a lizard on my shoulder. This was not too weird as the owner, a guy by the name of Dieter, did good, bold, old school tattoos. And his wife, Anke, does flowers and tigers etc. Anke said yes and did it and that was how I got started on the path of body modification.


I think tattoos and body modifications are normal for adults. It's your body so do something with it to make your inner image match your outer body image“.


„I have magnets in tow fingers and a RFID chip in my arm.“


The magnets make Mark's fingers sensitive to electric currents and magnetic fields giving him, in effect, a sixth sense and an enhanced awareness of his environment. The radio frequency identification chip is a tiny electrical device, not much bigger than a grain of rice, which can be used to store and transfer information such as a person's personal details. Though, in Mark's case, the RFID chip is programmed to one unique id number, so it cannot be reprogrammed.


Mark's passion for tattooing also goes hand in hand with his nomadic journey across the planet. He's worked in America, visited China on numerous occasions and has been across Europe and South America, all the time getting tattooed as he travelled.


„I’ve got tattoos from all around the world. I even became the first male centrefold in the German 'Tätowiermagazin' because my body art is a patch work from across the globe. And like sailors in former times, every tattoo comes from another place.“


Mark is no stranger to being on the other side of the needle either.


"I do fan tattoos once in awhile, usually my 'Vampire Smiley‘. But also little heart anchors and small stuff. Many students want them but also my friends. I only do them black, rough and dirty. I use a go rotary machine as the old coil machine started to kill my ears and nerves“.


In addition to his forensic work and his tattoo collecting, Mark has also worked with controversial artist and anatomist, Gunther von Hagens.


"I worked for Koerperwelten Body World from 1999-2000. Gunther was there the night before it opened and I was one of the few that night to give everything the final touch. Since then I have become very attached to the exhibit and to his factory in Guben on the Polish border. So much so that I give speeches for the public during Koerperwelten exhibitions in Europe.“


So what does the future hold for a man who has carved out a unique niche in the combined worlds of forensics and tattooing?


"I am like a modern sailor and so I have a lot of sailor tattoos. Hold Fast on my hands, Sailing for Truth on my back, a pirate girl on my leg. I just like to sail and see what happens next. I make no plans.“