Difference between revisions of "2012 08 Leica Unity: Looking for the Killer"

Looking for the Killer – with Leica Microscopes


Cologne, Germany. Germany’s most well-known forensic biologist, Dr. Mark Benecke, is often a guest commentator on German television programs such as the country’s version of the HBO series “Autopsy” or “Medical Detectives.” Additionally, he is welcomed as a guest on talk shows to discuss topics such as criminological evidence evaluation, murder or the general topic of the evil acts some people are capable of. Internationally respected, the expert holds presentations, writes books, and teaches students. However, Dr. Benecke‘s everyday work has little resemblance to what is depicted in TV crime dramas.


With a magnifying glass and a flashlight
The differences begin with the fact that Benecke never wears expensive Italian designer suits like the television detectives do. He prefers easy-to-wash clothing that can get really dirty. His most important utensils are first off a high-performance LED flashlight and a magnifying glass with 10x magnification, with which he searches for evidence on and around a body. He looks for things such as the developmental stage of the maggots that grow on a dead body during the process of decay. This can indicate how long it has already been in this state. If, for example, housefly larvae are found on a body discovered outside, the outside location cannot be the place of the murder. The person must have died in a closed room. At the crime scene, Benecke examines the evidence with a portable Leica DM1000 LED at up to 500x magnification. “The portable microscope is ideal for my style of work, because I can use it on the go. I am enthusiastic about how bright the LED illumination is,” reports the forensic biologist. 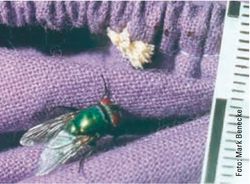 A green blowfly has just now deposited an egg sac (insect) on a bed sheet in which a body is wrapped.

Maggots provide information
When his examination of the scene of the crime is concluded, Benecke takes the samples taken there to the laboratory. With the Leica MZ12 stereomicroscope, he examines the maggots found on the body. Using the mouth parts, he can determine the blowfly species of the maggots. Their size and developmental stage can quickly lead to a conclusion on how long the body was at the place it was found. “For my work, the instruments must be extremely sturdy,” Benecke reports. “The Leica MZ12 is very stable. My colleague and I often work with relatively low magnifications. In these cases, a large field of view and large working distance are important. The Leica MZ12 provides all of that.” 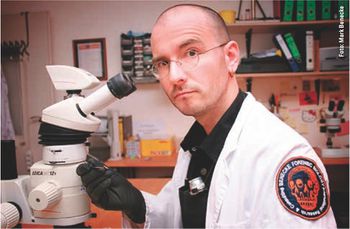 The Leica MZ12 stereomicroscope is one of Dr. Benecke’s most important work instruments.

Preventing presumptions
Unlike most investigators in TV crime dramas, Benecke is not a policeman; rather he is a publicly sworn and appointed expert that anyone can hire. He likes it best when his client makes as few assumptions as possible. “Frequently, I am called in by the parents of a victim, for example,” says Dr. Benecke. “Those are cases where relatives can sense that something is not right. Unlike the commissars investigating, they don’t say things like, “He’s the beneficiary of the life insurance policy” or “He stole his girlfriend.” My clients often don’t know any of that and just say, “There’s a spot of red, why is no one paying attention to it?”


Loyal Leica customer
Dr. Benecke has been a customer of Leica Microsystems for over ten years. “At the beginning, we drove to Leica in my colleague’s junky old car at the time. Those were not the golden days, because we had very little money,” the forensic biologist reports. “Despite our humble beginnings, the customer support representatives have always helped us to adapt the instruments to our special applications and, for example, designed photographic attachments. Precisely because our applications are so specific, it is important that the vendors listen to us and respond to our requirements.” 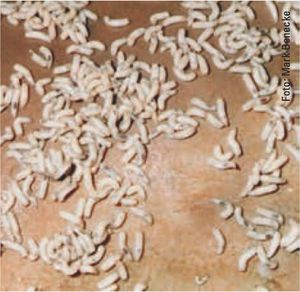 The photo shows a number of maggots on a body – a so-called “maggot carpet.” 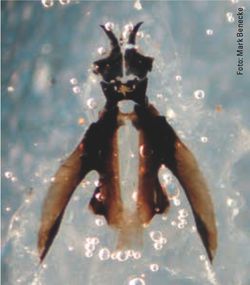 The freely prepared mouth part specimen of the blowfly determines the species of the maggot (acquired with the Leica MZ12).

One piece of evidence alone does not solve the case
In TV crime dramas, often one critical piece of evidence solves the case. This does not conform to the facts in the everyday work of Benecke. In one case involving the death of a woman, the forensic biologist for example carried out a reconstruction of the blood spots. The woman went for a walk around the block after a fight with her partner, and subsequently ended up slain in front of the front door. “I could not assess whether in this case the killer was the partner or a stranger. I simply presented to the court in what pattern and in what direction the blood was sprayed,” Benecke explains. “The conclusions had to be made by the judge.”


Identifying holes in detective work
However, there is one thing Dr. Benecke has in common with the television detectives: In emergencies, he is available around the clock. A criminal author once called him on his emergency number and asked him whether you can dissolve bodies in hydrochloric acid. “That, of course, is not an emergency,” says the forensic biologist. “Over my decades of experience, I have often been called when the detectives get stuck or to determine what pieces of evidence were not even taken by the investigating officials. My job is to check for where errors might have been made. Which clues were not examined? That does not happen out of malice, but rather because the participants did not notice relevant details or did not think they were important.”


Declining crime rate
The forensic biologist is also busy with the psychological background of crime. He strictly does not use categories such as “evil.” “Humanity has created the evil themselves,” Benecke explains. “If all people behaved reasonably, in other words simply talk to one another from time to time, it would already change a lot. In principle, the crime rate in Germany is declining; most people don’t know that. Another topic entirely is antisocial psychopaths like the Norwegian spree killer Anders Behring Breivik, whose killing spree took the lives of 77 victims. Such people will always commit crimes. But from the perspective of evidence, cases like these are boring. These are crimes so blatant that the evidence is completely unimportant.”