[Huge photo gallery of Mark from / in China] 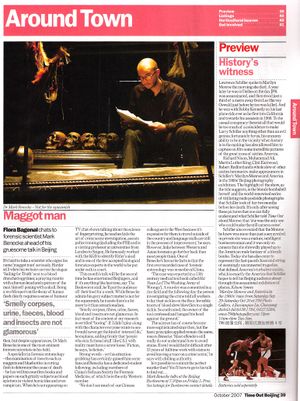 Mark Benecke in TIME OUT Beijing: Speech at Bookworm'

It's hard to take a scientist who signs his name 'maggot man' seriously. Harder stillwhen his website arries the slogan 'Sailing for Truth' next to a blood drenched egg timer, a praying mantis with a human head and a picture of the man himself posing with a skull. Being a world expert on the decay of human flesh clearly requires a sense of humor then, but despite appearances, Dr. Mark Benecke is one of the most eminent forensic scientist in his field.


A specialist in forensic entomology - the examination of insects such as maggots and bluebottles in rotting flesh to determine the cause of death - he has written countless books and papers on such grizzly subjects as blood splatters in violent homicides and even vampirism. When he's not appearing on TV chat shows talking about the science of fingerprinting, he teaches kids the art of crime scene investigation, assist police training (including the FBI) and is a visiting professor at universities from London to Saigon. He famously worked with the KGB to identify Hitlers's skull and is one of the few accepted biological forensics experts in the world to be put under oath in court.


This month's talk will be the second time he has entertained Beijingers, and if it's anything like last time, say The Bookworm staff, he'll put the audience off their food for a week. While Benecke admits his gory subject molter is not for the squeamish, he insists there's a lot more to it than sensationalism.


'Smelly corpses, fibres, urine, faces, blood an insects are not glamorous. In fact most oaf the content of my research is certified "boring". If I didn't play along with the character everyone wants to see I would never get the kind of interest I do,' he explains, adding firmly that 'people who mix fictional stuff like C.S.I. with reality must have a sew loose.' Fiction, he says, 'is fiction.'


Strong words - yet his attention-grabbing has certainly gained him some fans and Benecke ha a dedicated student following, including members of China's Sichuan Society for Forensic Medicine, of which he is the only Western member.


'We don't see much of our Chinese colleagues in the West because it's expensive for them to travel outside of the country and language skills are still in the process of improvement,' he says. However, links between Western and Asian forensics go further back than most people think. One of Benecke's favorite facts is that the first ever recorded case of forensic entomology was in medieval China.


The case was reported in a 13th century medical textbook calls His Yuan Lu (The Washing Away of Wrongs). A murder was committed in a rice field and the following day the person investigating the crime told all workers to lay their sickles on the floor. Invisible traces of blood drew blowflies to a single sickle. So confronted, the owner of the tool confessed and banged his head against the ground.'


The science has of course become more sophisticated since then, but the basic principles applied remain the same, insists Benecke: 'Most offenders still really do not understand how to avoid stains. Even I would find it difficult after 15 years of full-time work with stains to avoid leaving a trace on a crime scene', he says with chilling authority.


Is it possible to commit the perfect murder then? You'll have to got to his talk to find out…